365 Women a Year is an international playwriting coalition involving over 200 writers across the world who have signed on to write one or more one-acts about extraordinary women in history. The project’s ambitious yet focused goal is to write women back into the social consciousness as well as empower and promote female playwrights, and plant seeds of herstory around the country.

This January, as part of Hubbard Halls Annual Winter Carnival, we presented three returning plays and one world premiere.

Hubbard Hall is an arts center supporting creativity and inviting participation to make art and community happen. The Hall strives to enrich the lives of individuals and communities, and offer valuable pathways to learning through the arts. Hubbard Hall intends that its programs promote and serve as a magnet for artistic activity.

The event was a huge success, with a full houses on both nights. On the last night of the festival, we completely sold out! 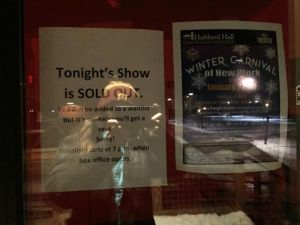 A huge thank you to Hubbard Hall for their financial and artistic support, and for providing a venue for this work. Thank you to Olde Castle Theatre for donating costume pieces. Thank you to 365 Women a Year for their support. All of these organizations have allowed NOplays to continue our mission to bring more women onto the stage!

After the Thin Man, written by Shellen Lubin.

365 Women a Year and the Winter Carnival in the news:

To read more about this project in the Bennington Banner, click here!