The journey of three women on an express train to an unknown destination. This gritty drama was inspired by Jean Genet’s NO EXIT.

Produced by Broads’ Word Theatre at The Lounge Theatres, 6201 Santa Monica Blvd., Hollywood, CA, November 7-December 12. Tickets are $22.00, available at:www.plays411.com./womenwowalls or https://goo.gl/juDQp8. There will be talk-backs with Director Frances Loy, the cast and Artistic Director, Danielle Ozymandias on Sunday November 15th and on Sunday, December 6th with Playwright, Robin Rice, Frances Loy and the cast. More information at www.BroadsWordTheatre.org.

A Midnight Clear: The Christmas Truce of 1914 by Donna Latham.

Are people capable of peace? In this historical World War I drama, war scatters a group of dear friends. Action swings between the trenches and London’s home front. Percy, promised he would be home for Christmas, battles in No Man’s Land. He grapples with his religious beliefs and moral compass in the face of war’s new rules. With her loved ones entrenched in a war of attrition, Eugenie is entrenched in the home front. She defies Grandmama to take a nursing position in the hospital, determined to do her bit to help the war effort, hone her skills in medicine, and maintain hope. In the most horrific of places, the historic Christmas Truce of 1914 sweeps across the Western Front. With an agreement forged from the trenches, weary soldiers take a leap of faith to halt brutal battles. Enemies wage a fleeting peace. British and German soldiers unite to celebrate Christmas. They bury their dead, share goodies from home, swap trinkets, and join voices in song.

Walking After Midnight by Allie Costa.

Walking After Midnight is an original, fantasy-free retelling of Cinderella in which a young woman searches for her way home – and her ever after.

A New Year by Allie Costa. 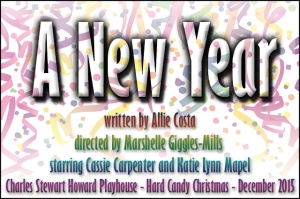 Should old acquaintance be forgot? Home for the holidays, Asha runs into her old best friend and she’s not too thrilled about it. 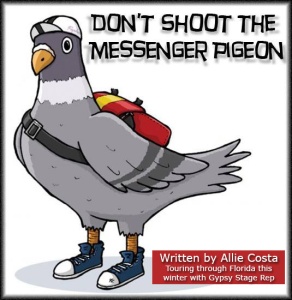 Produced by Showcase Productions in Amherst, Nova Scotia B4H 4B9 at the Anglican Church Hall December 2-4, 2015. Proceeds fund scholarships for deserving students in the county who wish to pursue an education in the arts. Contact Showcase Productions for more info, and Theatre Off the Square at 114 N. Denton Street in Weatherford, TX, December 4 – 20, 2015. Tickets are available now. Call the box office at 817-341-8687 or check out their website at http://www.weatherfordtots.org.

Cut and Run by Allie Costa. 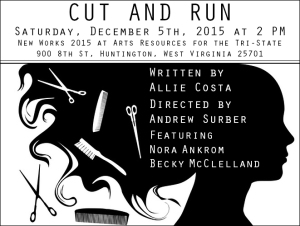 A hairstylist and a customer who learn that, in this hair salon, it’s live and let dye.

Multiple readings in February 2016 by the Tennessee Stage Theatre in Knoxville, TN.

To submit to the January issue of LADIES FIRST, email natalie.noplays@gmail.com before the end of the month. Send us your name, the name of your play, the name of the theatre producing your work, a sentence or two about the play, the where and when, and an image. Thank you to everyone who participated in this month’s LADIES FIRST newsletter.