365 Women a Year, The Bennington Plays 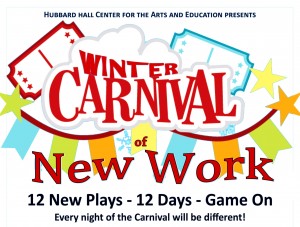 Featuring After the Thin Man by Shellen Lubin, Feelin’ Lonely by Catherine Weingarten, Pina by Emma Plotkin, and Making Frankenstein by Natalie Osborne.

Produced by Hubbard Hall as part of their Winter Carnival of new plays, January 29th-January 30th.

In the vein of classic noir such as Double Indemnity, the play follows a female private investigator hired by a notorious playboy to solve a murder in 1944. Directed by Toni Braun, the cast includes Debra Carozza-Lynch, Geoffrey Waumans, Judy Wilson, Elizabeth Marsh, and Brittany Bur.

How Soon is Now? by Allie Costa

Performed by Kitty Torres, this is one of nine pieces selected for The Morrissey Plays, directed by Stuart Bousel.

The Intervention Will Be Televised by Allie Costa

Directed by Bryan Rasmussen, this will be the world premiere of the play, which previously had readings at Play Club West and Drama West. Whitefire Theatre

Produced as part of Winter Shorts, a festival of short funny plays,  at Whitefire Theatre in Los Angeles, January 19th through February 23rd, 2016.

To submit to the February issue of LADIES FIRST, email natalie.noplays@gmail.com before the end of the month. Send us your name, the name of your play, the name of the theatre producing your work, a sentence or two about the play, the where and when, and an image. Thank you to everyone who participated in this month’s LADIES FIRST newsletter.