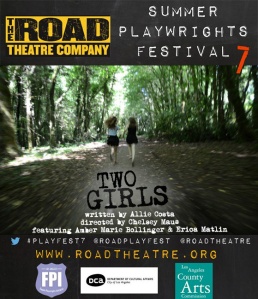 Currently running in Los Angeles, features 36 plays, 18 of which were written by women – 50/50 representation! One of the selected plays is Two Girls – staged reading August 2nd at the Road Theatre. 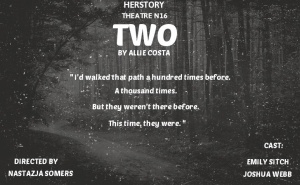 Over 50 years ago Gloria Steinem began to change the world by speaking about women’s rights, fighting for equality and speaking her mind. But despite Steinem impacting the feminist movement and accomplishing so much the fight is still present. What are the issues that women of the XXI century face on a day to day basis? Why is abortion still a taboo subject? Why are we taken aback when we hear a woman saying “I don’t want to have children”? Why are women so constantly objectified? And finally, have things really changed since Miss Steinem led the women’s liberation movement back in the 60’s and 70s? Those are just few of the hundreds of questions that come to mind when one talks about equality and contemporary feminism. HERSTORY, a feminist festival, aims to bring those questions to the stage by creating a platform for political discussion and giving a voice to women. Join us at THEATRE N16 on the 6&7 of August for two evenings full of new writing, performance art and plenty of discussion about feminism.

Featuring Two (August 6th) and She Has Seen the Wolf (August 7th) by Allie Costa.

Margaret of Anjou by Lauren Jansen-Parkes

Produced by Those Women Productions

An “undiscovered” feminist Shakespeare play by Lauren Jansen-Parkes and William Shakespeare: Margaret of Anjou is a high-stakes drama of betrayal, intrigue, and medieval power politics – eerily relevant to the present moment in American politics.

To submit to the September issue of LADIES FIRST, email natalie.noplays@gmail.com before the end of the month. Send us your name, the name of your play, the name of the theatre producing your work, a sentence or two about the play, the where and when, and an image. Thank you to everyone who participated in this month’s LADIES FIRST newsletter.