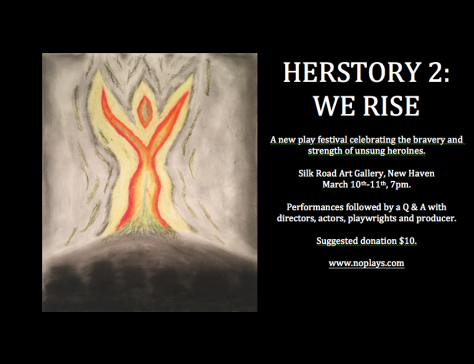 Now more than ever, it’s important for women to tell our stories and make our voices heard. NOplays is proud to present: HERSTORY 2: WE RISE, two evenings of new plays celebrating the strength and bravery of unsung heroines.

HERSTORY 2: WE RISE; is NOplays second incarnation of the HERSTORY Festival. The goal of this project is to continue shedding a light on the untold stories of women in our country, both in our history, and on our stages. HERSTORY 2: WE RISE features the struggles and triumphs of native women, like Native American civil rights activist Anna Mae Aquash; groundbreakers like Ida Lupino, who became one of Hollywood’s first female directors; and immigrants who came to this country and dreamed of touching the stars, like astronaut Kalpana Chawla, among others.

The plays featured in HERSTORY are part of 365 Women a Year. This international playwriting coalition involves over 200 women across the world who have signed on to write one or more one-acts about extraordinary women in history. The project’s ambitious yet focused goal is to write women back into the social consciousness as well as empower and promote female playwrights, and plant seeds of herstory around the country.

HERSTORY will take place at the Silk Road Art Gallery in New Haven, CT, March 10th and 11th at 7pm. The performance will be followed by a Q & A with the writers, actors, directors, and organizers. Plays include Ida and Leonor written by Danielle Winston and directed by Ingrid Oslund, A Moment of Silence, written by Allie Costa and directed by Moira Malone, K.C. Reporting, Earth Do You Read Me? written by Natalie Osborne and directed by Keith Paul, and My Aim is True, written by Lucy Wang and directed by Shellen Lubin. There will be a raffle with prizes including gift cards to Cloud 9 Day Spa, Rainbow Gardens, and the Canvas Patch. There is a $10 suggested donation for entry. Tickets are available at the door, first come first serve. We hope to see you there!

*WE NEED YOUR HELP*

NOplays depends on donations in order to keep supporting female writers! If you would like to support HERSTORY 2: WE RISE, consider giving a small amount. All donors receive a shout-out in our program. Click here.

One thought on “HERSTORY 2: WE RISE”