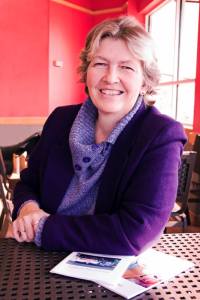 Q: Can you tell us more about your experience writing for 365 Women a Year?

A: I’ve been on-board from the beginning. Jess Eisenberg is doing a great thing where women are concerned with this project to get women, well-known and obscure, on stage. I’ve met a few of the other playwrights from the project, and I was even Festival Director for the 365 Women a Year Festival in Detroit in 2016. I can’t say enough good things about 365 Women a Year!

Q: What drew you to Frida Khalo?

A: Well, I’m a visual artist too and I’ve always loved Khalo’s work – she’s so colorful! I especially love her “Self-portrait with Cropped Hair.” I was so happy to write a play featuring her for the 365 Women a Year project…I was afraid someone else would request her before I did!

Q:  What was a major challenge you had to overcome while writing this play?

A: I really didn’t want Frida to come off as shallow. I also wanted to give the play humor, but not make fun of the situation at hand. I feel that I still gave Frida respect, and I feel that there are some humorous moments without being “mean.” I also didn’t want it to be a takeoff of the movie about her life either…so I wanted to focus on other aspects than were highlighted there.

Q: Your play focuses on a side of Frida Khalo most people are unaware of, what lead you down this path?

A: As a lesbian, that didn’t come out until later in life, I was fascinated when I found out that Khalo had dalliances with women, even though she was always “with” Diego. I felt that writing this play would allow others to see that she had that side to her as well.

Q:  People seem almost as fascinated by Frida Khalo’s personal life as they are by her artwork, if not more so, why do you think that is?

A: As I said, her art is “colorful” and I think we could say her life was pretty “colorful” as well. She certainly lived her life, had a forceful personality, gave Diego as good as he sent, she was politically active at a time women weren’t known to be, and then she had such pain from the bus accident…so I think there’s a lot there for all types of people to be fascinated by!

Q:  During her life, Frida Khalo’s work was overshadowed by her husband Diego, do you see this as a problem women creators still face today?

A: Yes, she certainly was overshadowed by Diego, wasn’t she! Yes, I feel that many women still take a backseat to their partners/husbands today. And, unfortunately, being creative isn’t always seen as an integral part of our society…so if you’re a woman, and you’re creative, you’ve got two hills to climb already, then if you have a man who is not supportive…or is also in the arts, as Diego was, there’s another obstacle! I do hope that with the women’s movement picking back up again, that this will all even out for all of us.

Q:  What are you hoping audience members will be left with after seeing your play?

A: I hope it makes them think that people are attracted to who they’re attracted to…we shouldn’t be so quick to judge and put people in a box. By the same token, I feel that the play shows that if you love someone…they do have a hold over you…for better…or worse.

Q:  What’s next for you? What are you working on now?

A: I’m working on more plays for 365 Women a Year! The immediate play I’m working on is a play about another woman artist, Francoise Gilot.  I find her fascinating because she’s in her 90s now, and she still paints! In addition, she had an affair with  Picasso for 10 years and is the mother of two of his children. She also was married to Jonas Salk until he died in 1995…so I feel like she’s got a lot of interesting twists that I can write a play about! I’m also going to write a play about the poet Ruth Stone after I finish this one. Additionally, I’m always writing poems and painting!

A: I have a full-length collection of poetry coming out this spring, It’s Not Love, Unfortunately, which will be published by Chatter House Press. I’d also like to express my appreciation for being a part of HERSTORY 3! I’m so honored, and especially happy that it is with my Frida Kahlo play. Thank you!

You can see Frida Khalo: Heartbreaker, March 9th and 10th at the Institute Library in New Haven. You can reserve your tickets ahead of time here. Tickets will also be available at the door for a $10 suggested donation. If you would like to support HERSTORY by making a small donation, click here or visit our Cafepress Store.