Plano, Texas May 5th through May 14th. http://www.roverdramawerks.com/

Running May 20th through May 28th at Studio/Stage in Los Angeles. Inspired by classic noir stories such as Double Indemnity, Femme Noir revolves around a female P.I. hired by a notorious playboy to solve a murder in 1944. Written and directed by Allie Costa. http://urbantheatremovement.com/

She Has Seen the Wolf by Allie Costa

Produced as one of six plays named Best of PlayGround-LA for the 2015-2016 season. 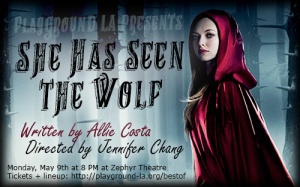 The selected plays will have staged readings on Monday, May 9th at Zephyr Theatre in Hollywood and will be published in the Best of PlayGround Los Angeles 2016 anthology. In She Has Seen the Wolf, a modern-day Red Riding Hood asserts herself after receiving unwanted attention from a wolf.http://www.playground-la.org/bestof/

To submit to the June issue of LADIES FIRST, email natalie.noplays@gmail.com before the end of the month. Send us your name, the name of your play, the name of the theatre producing your work, a sentence or two about the play, the where and when, and an image. Thank you to everyone who participated in this month’s LADIES FIRST newsletter.