NOplays is excited to announce our 2017 Season!

We have three exciting productions coming up this year.

A 365 Women a Year event featuring plays written by women about women. The Silk Road Art Gallery in New Haven, March 10th and 11th. Sponsored by the Dramatists Guild

The Masks of the Goddess, or a Heroine’s Journey

As well as play readings, our Ladies First newsletter, and other efforts to produce and promote works by women writers!

If you would like to support these productions or any of NOplays other projects, consider making a donation, visit our Cafepress store, or come see a show!

Produced by: Our Generation Festival, Ireland.

Running November 6th, 7th, and 8th at Tricky’s McGarrigles in Sligo, with an additional performance November 9th at An Caife Bia Slainte in Manorhamilton. Book tickets by emailing therabbitsriottheatrecompany@gmail.com or by contacting The Rabbit’s Riot Theatre Company on Facebook.

Produced by: Obsidian Theatre in Texas. 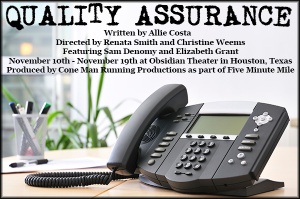 Directed by Renata Smith and Christine Weems, will run November 10th through November 19th at Obsidian Theatre in Texas as part of Five Minute Mile. In this fast and funny story, a telemarketer doesn’t seem to know what he’s doing. Featuring Sam Denomy and Elizabeth Grant.

Five Minute Mile is produced by Cone Man Running Productions.
Five Minute Mile is a unique night of theatre where any given night you see a different lineup of plays. 32 plays were selected for the production.  Eight are scheduled to perform each night.  The next six are drawn at random at the start of the show.  The last six are voted on by the audience based on the title, descriptions, and the actors involved. It’s a different lineup every single night!

One Acts and Snacks at Casa de Beverley 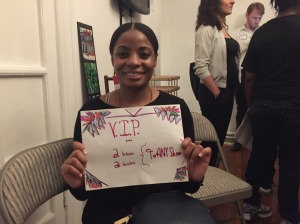 Join Casa de Beverley for One Acts and Snacks in Brooklyn, Saturday, November 19th at 6PM for great art, conversation, and food. This season we are focusing on 10 minute plays written by female playwrights.

Remote Control by Ann Mary Mullane
I Join A Mental Institution and Have Fun! by Jodie Leidecker
The Agnostic Foundation for Dying With Dignity’s 50th Annual Lottery by Simi Toledano

To submit to the December issue of LADIES FIRST, email natalie.noplays@gmail.com before the end of the month. Send us your name, the name of your play, the name of the theatre producing your work, a sentence or two about the play, the where and when, and an image. Thank you to everyone who participated in the first LADIES FIRST newsletter.

A Moment of Silence by Allie Costa

Produced by the Stella Adler Theatre in Hollywood 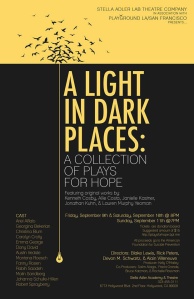 September 9th, 10th, and 11th as part of A Light in Dark Places: A Collection of Plays for Hope. Five plays were selected for this festival. All proceeds will go to the American Foundation for Suicide Prevention.
https://www.facebook.com/playsforhope/
http://www.brownpapertickets.com/event/2582896

How I Knew Her by Allie Costa

September 16th-25th. Directed by Liz Michaelson, featuring Lauren Schulke as Kylie and Chad Giefer as Cole. How I Knew Her is one of seven plays selected by Eden Prairie for their Collection of One Acts. http://www.edenprairieplayers.com/2016oneacts.htm

One Acts and Snacks at Casa de Beverley

One Acts and Snacks is a monthly gathering to hear and discuss new plays from up-and-coming playwrights. One Acts and Snacks is not a traditional play performance, but rather a semi-produced table-read. This means that every character is assigned an actor or actress, and the entire script — along with the stage directions — is read in its entirety.

Following the read-through, the audience will be able to interact directly with the playwright, asking questions and providing feedback. Socializing and networking will follow.

This year, One Acts and Snacks is proud to be producing an entirely female season! This month features the works of Jacqui Lynch, Karin Diann Williams, and Jenna Schlag.

September 17th at 6pm at Casa de Beverley, in Ditmas Park (exact address will be given to those who purchase tickets.)

To submit to the issue of LADIES FIRST, email natalie.noplays@gmail.com before the end of the month. Send us your name, the name of your play, the name of the theatre producing your work, a sentence or two about the play, the where and when, and an image. Thank you to everyone who participated in this month’s LADIES FIRST newsletter.

The 10-minute play festival will explore queer heroism — or Queeroism. Queer theatre often focuses on hardship: heartbreak, illness, shame, discrimination, and oppression. These difficult stories need to be told and they need to be heard. With this festival, however, we make it our mission to honor queer pride through stories of heroism, tenacity, strength, community, and individuality.

The Birthday Boy by Roy Proctor, directed by Lexi Saunders

The festival will run July 8th and 9th at Collaboraction.

HEAD OVER HEELS by Susan Goodell

HEELS OVER HEAD is a quirky comedy about two eloping honeymooners who fall in love on a bungee jump and determine to stay in romantic glow despite of all sensible evidence against it. Winner of Rover’s “Seconds” play contest.

ALICE IN BLACK AND WHITE by Robin Rice.

Running at 59E59 Theatre in New York City from August 3 to 14, produced by Looking for Lilith Theatre Company of Louisville, Kentucky.

ALICE is the story of Alice Austen, a woman who lived on Staten Island, NY, during Victorian times. She bucked conventional society, became the first female photo-journalist, and refused to get married in a time when that was not only frowned upon, it was financially very risky.

To submit to the August issue of LADIES FIRST, email natalie.noplays@gmail.com before the end of the month. Send us your name, the name of your play, the name of the theatre producing your work, a sentence or two about the play, the where and when, and an image. Thank you to everyone who participated in this month’s LADIES FIRST newsletter.

Need to buy the theatre lover in your life a last minute gift? Want to support gender equality in theatre? Do you just really like our logo and want to have it on a bunch of stuff?

Every time you buy something from the NOplays Cafepress store, money goes to supporting women in the arts and theatre.

And just look at all the great things you can buy!

Want to see more? Visit the store and have a look for yourself! Click here.

Thank you to everyone who came out and saw HERSTORY this weekend. We’re so grateful for your support! Because of you, NOplays is one step closer to creating gender equality on the stage and in the pages of our history books.

Theatre can’t exist without audience members to see it and a community to support it, so if you enjoyed the performances this weekend, go see some more theatre! There’s so much amazing work happening all over Connecticut, and you can make sure there will continue to be so for generations to come!

Thank you again and we look forward to seeing you at our next performance!

The Culla Family won a poster signed by the cast.

And we said good bye to three beautiful plays.

Congratulations to everyone involved in the project on a job well done.

In honor of International Women’s Day and Women’s History Month, NOplays is launching our first fundraiser! We hope that you’ll consider making a donation today!

Any amount you can give will help us support women in theatre, but in order to receive a historical women’s trading card, you must give a minimum of $7.50. WE’RE LOWERING THE MINIMUM DONATION TO $5!!!! These cards are limited edition AND WILL ONLY BE AVAILABLE UNTIL FRIDAY, APRIL 8TH, 11:59AM. Make sure you get in your donations quickly. Thank you for your support!